I have a yellow and red prize pal that is lvl 3 halfway to lvl 4. I’m looking to trade it for a alpha chest or forest. I’m hoping to do this as fast as I can. 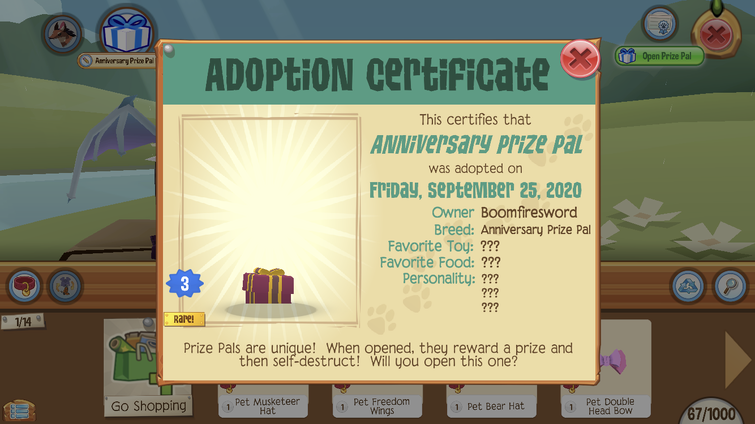 any offers? I'm trading one, and I'm mostly lf teal forest w/ a possible add? (Obviously not a big add)

Taking other offers as well! (this includes saps)

you know it's bad when i have to say "my forest is nft" in my advertisement just so people can stop asking about nft items!

please, guys, one of the simple rules of trading on ajpw is NOT ON TRADE = NOT FOR TRADE. i'm so sick of getting excited to see someone's offer for something on my list, or if someone has my wishlist, just to hear the same old song again. "hi, can i offer for your forest?" "this for your boots?" so please get some common sense when it comes to trading! thank you for reading my rant 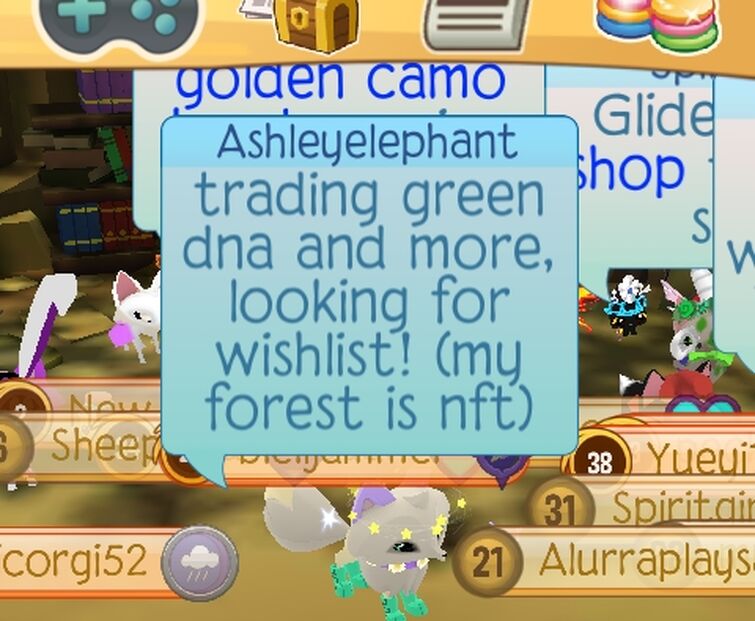 pass photos or say what you offer for forest teal or red feathered ear.

Looking for variety with things like prize pals, furry arms cuffs, teal forests and such.

Should I do this trade? 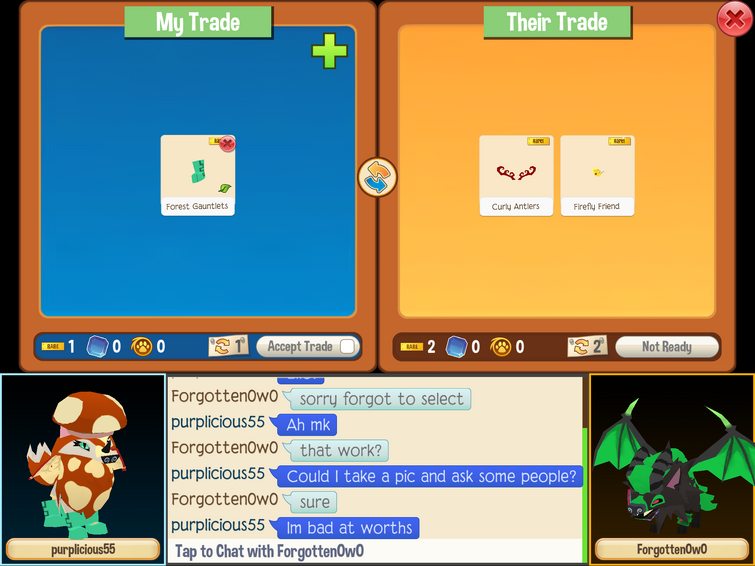 Please tell me your username if you will do this! if you do, you have just made my day.

Here is my list, I am trading ALL of it for teal forest boots:

So yeah! those are all the items I am willing to trade. Please don't tell me if I'm under, but you can let me know if I am over.

Please tell me your username if you will do this! if you do, you have just made my day.

Here is my list, I am trading ALL of it for teal forest boots:

So yeah! those are all the items I am willing to trade. Please don't tell me if I'm under, but you can let me know if I am over.

Little note: I know a scammer when I see one! 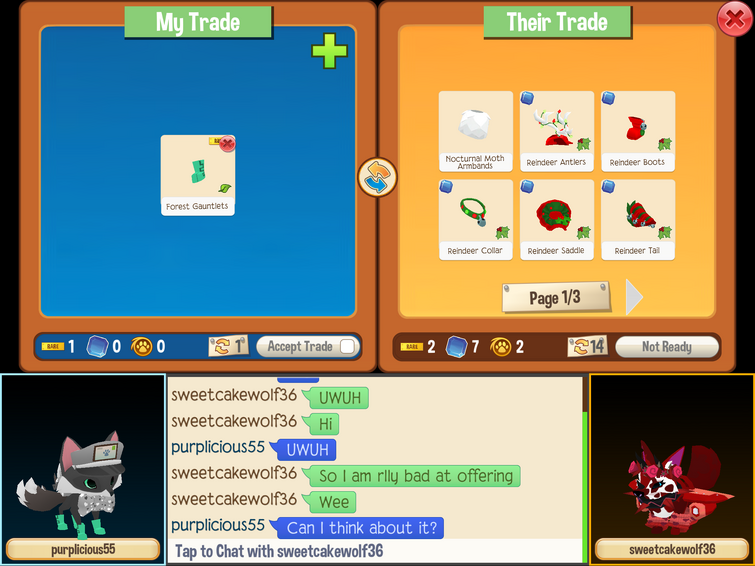 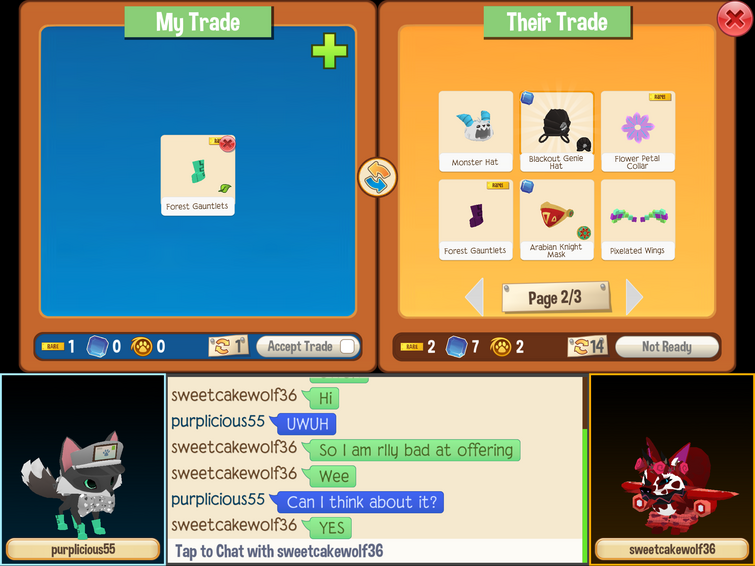 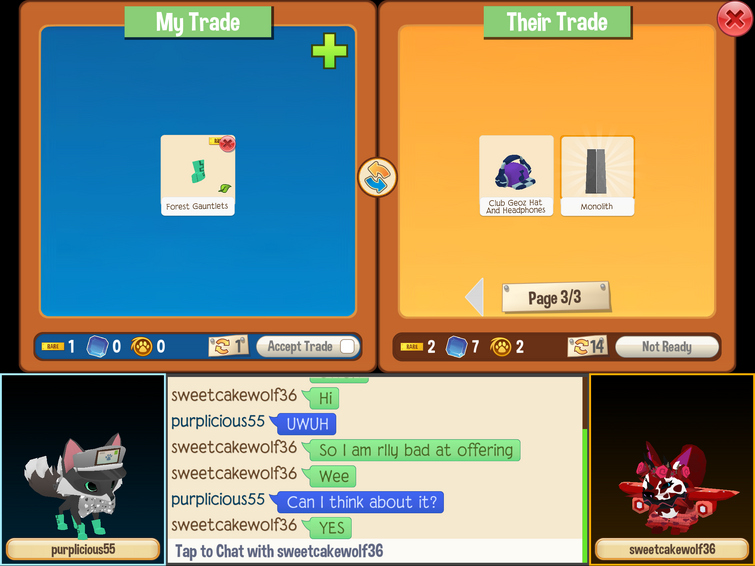 Should I do this trade??? 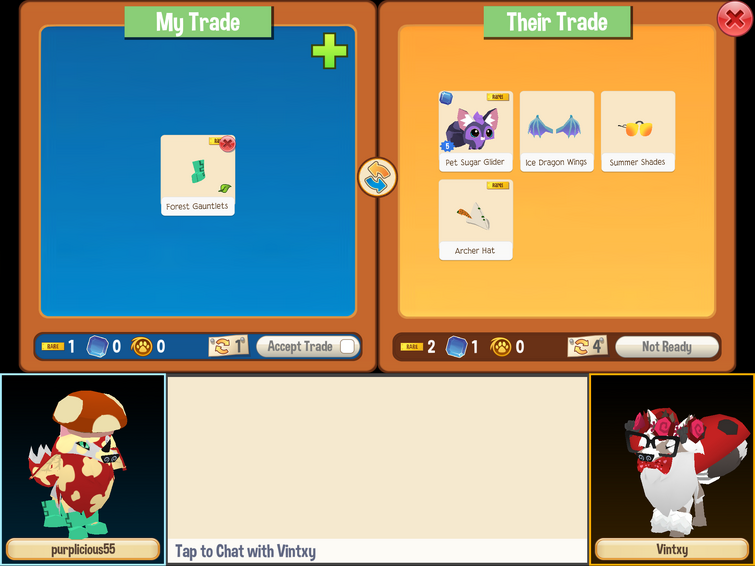 I know I’ve been asking a lot but I just bought these for 450 sapphires! I’m really happy with them!! 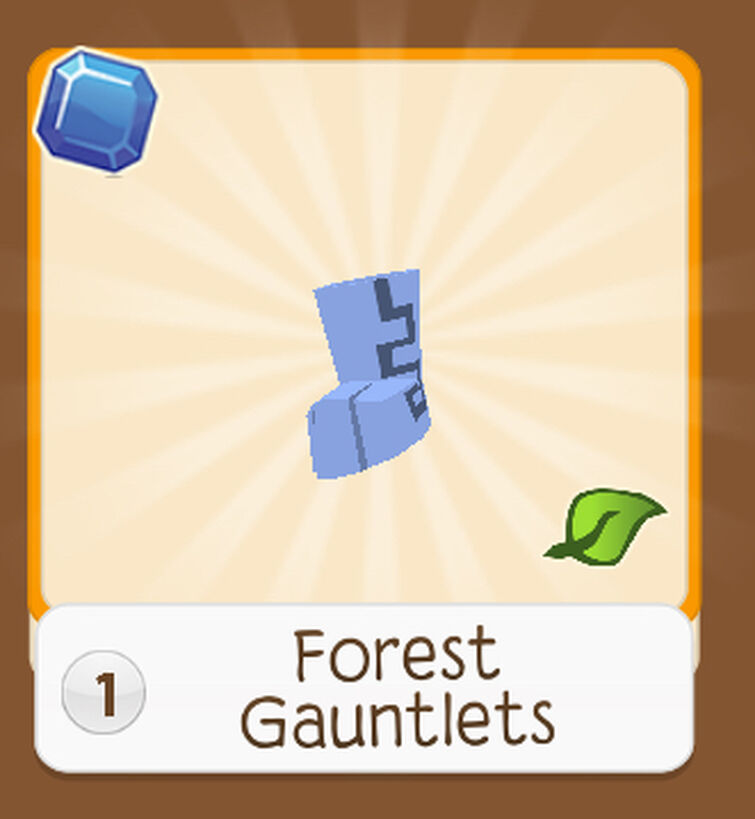 Lemme know if it's fair

Let me know if im under 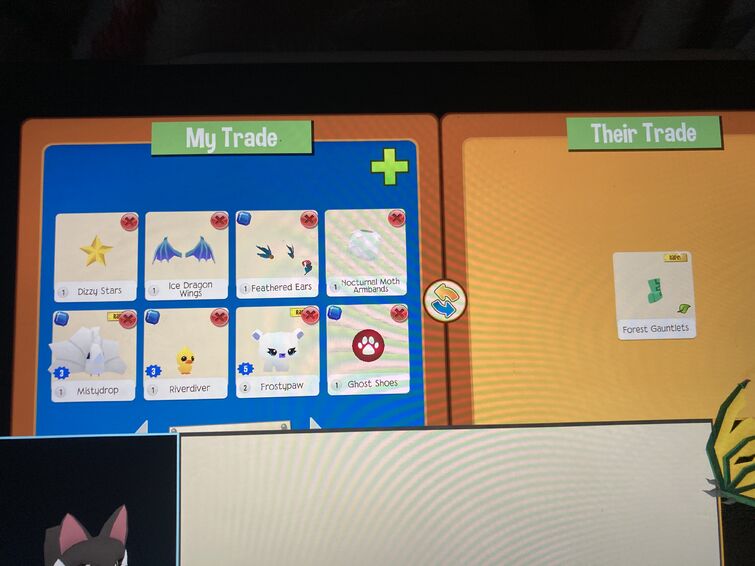 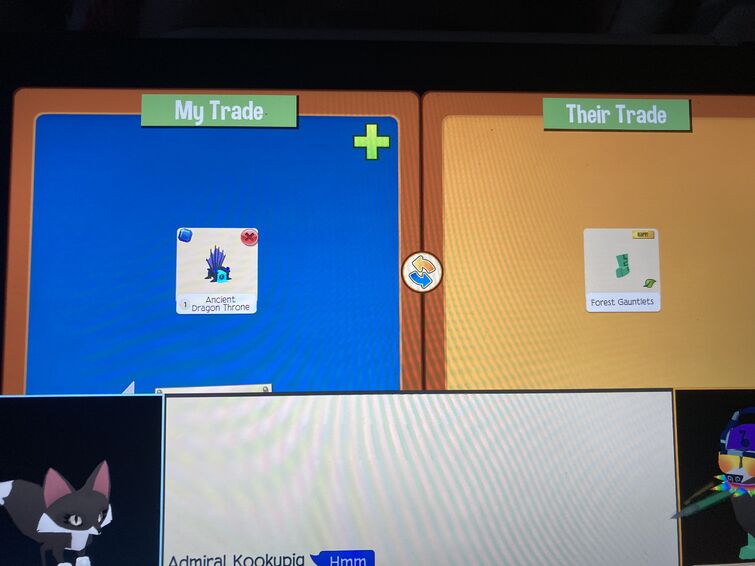 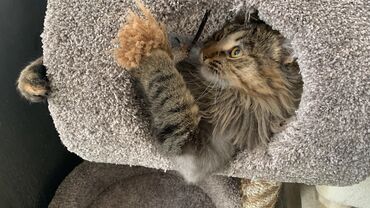 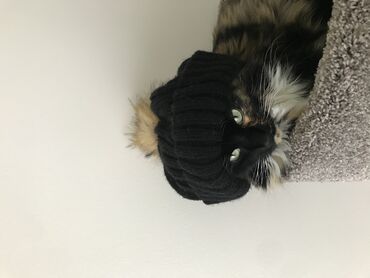 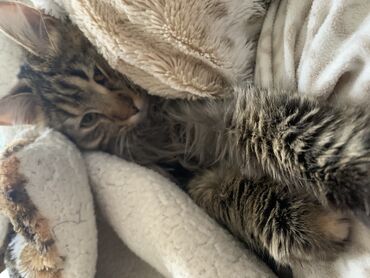 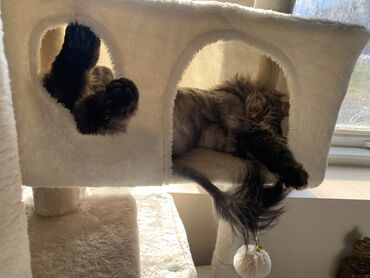 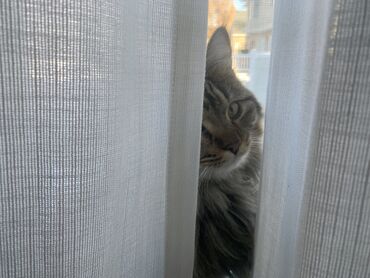 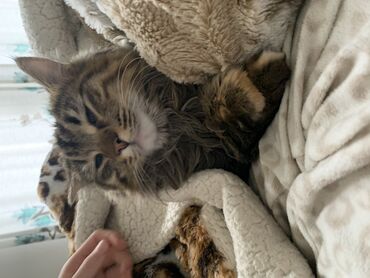 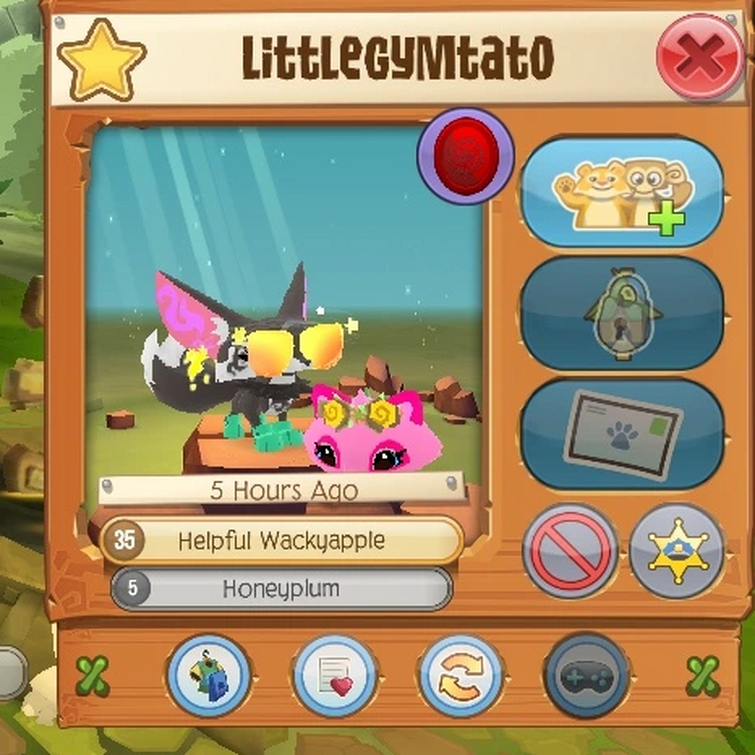 She's wearing my stolen forest like a trophy grrr.. 🤬🤬🤬 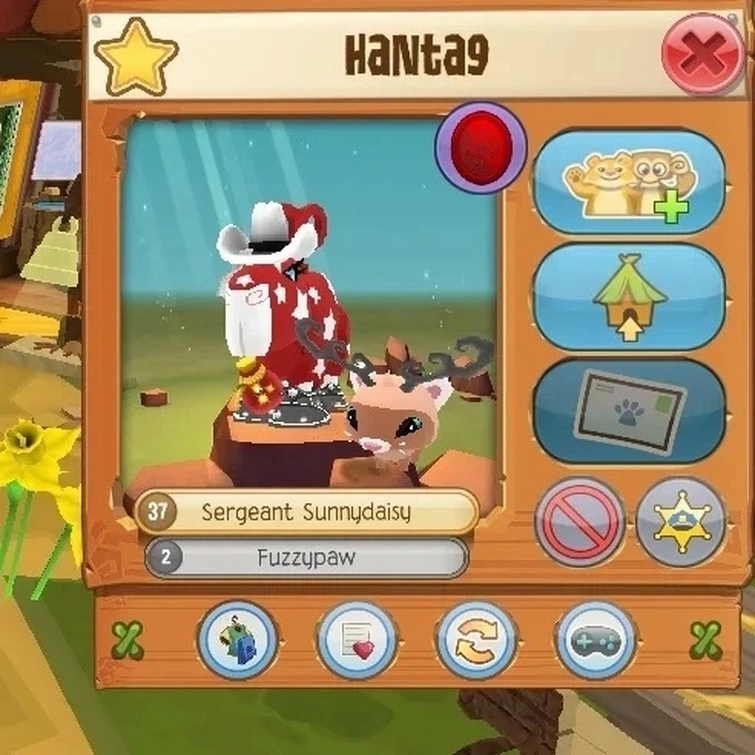 The second jammer was a assistant in scamming me.

All Proof I could get with a 7 year old T-Mobile phone:

Story of what happened:

I went to the article wolf cave to advertise my shop. I advertised for a good 20 minuets before my scammed showed up and was walking around the area "anyone wanna be my buddy? " they asked repeatedly, bearly spamming. After about another 5 minuets they started saying "PLS be my buddy no one likes me :(" "why does everyone hate me? :(" . I felt bad so I went over and said I'd love to be their friend and I would have loved to be their friend too! If the weren't a dirty scammer... After I said I would be their friend they rejoiced and asked if I wanted to hang out at their den with then and have fun. I agreed and went with them.. The other jammer them came and I asked who they were and they said they were a bff which I thought was a but strange if they said they had no friends. After another 30 minuets they started stalking to each other about their outfits and rares. The fox asked for a trust and the jammer said yes. They did a few trust trades them I was asked to do it too cause I had the teal boots and it was apparently their dream. I said no a lot at first, they asked me about 8 times. Then we went back to playing for a bit then they started making the sad and crying emojis, I was worried so I asked them what was wrong and they said "I just really want want forest boots so I can see what they looks like" -with their outfit- and I said I was sorry and I explained myself of my trust issues as I have been scammed and used and hacked before. Then they started messaging the other jammer , I don't know what they said to each other cause it was in jam-a-grams. Then the other jammer started insulting me calling me a "no0b", a "greedy player", " a horrible friend. " etc. Then I said I would do it after they did another trust after another bunch of arguing over the trading to show they can be trusted. I said no again and then it was in another loop. After all of that, they finally got a yes out of me cause they said "you can have my spike and shades in return" which were a black out spiked collar and a pair of summer shades. I said okay and that I guess that it sounded fair .. We started back blank trade and I put up my forest, they clicked accept as soon as I did and I said they had to give me their items first, they put them up and we almost did a trade and then they canceled before it could go through and said they didn't have the items anymore so I just assumed I was laggy as usual as for me sometimes I have to close and reopen the game and stuff will be there when it wasn't before like won items from games. So inteadednthem my forest and they said "boo they look so pretty, Tyssvm. Bye!! :) " and they locked me out, unfriended me, blocked me, and then went offline.

I started freaking out and I went to the other jammer who I forgot to mention that I also buddied.. I told them what happened and all they said was "what a snake. " then never said anything to me after I asked them to help me and they refused. When my game crashed due to lag from my keyboard I went back and the other jammer also blocked and unfriended me. Their den is still open but they keep ignoring me. Someone PLS help me.

Hullo, so ihv a lot of items that i can trd for teal forest.

Actually is this fair?:

Idk but u can tell ur opinion in replies, ty

(User: dachshundlover43) (Plus i actually haven't add the things in my list but i'll do it later)

Looking to trd up my list, be fair! Also will accept my whole list for any color alpha ghost dragon wings, its my dream :) Total worth almost 4 forests

For trading up im lf wind, rare raccoon, myth or stuff like that

Worth based on wiki

Feather boa- no wiki page (i was offered 0.5 forest worth)

Someone just gifted me forest

Which if you didnt know

Has been my dream item