Animal Jam Classic is a virtual world online game developed by the National Geographic Society in partnership with WildWorks (formerly Smart Bomb Interactive). It is the game that Animal Jam is based on.

Animal Jam Classic is a safe and exciting online playground for kids who love animals and the outdoors. Players create and customize their own animal characters and dens, chat with friends, adopt pets, team up for adventures, and feed their curiosity about animals and the natural world around them.

Animal Jam launched its open beta testing during the summer of 2010, eventually ending during September of 2010 which makes September Animal Jam Classic's Birthday.

The Animal Jam Classic logo during its alpha testing. 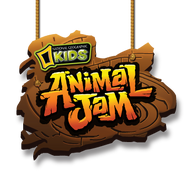 The Animal Jam Classic logo during its beta testing
Add a photo to this gallery
Retrieved from "https://ajplaywild.fandom.com/wiki/Animal_Jam_Classic?oldid=337606"
Community content is available under CC-BY-SA unless otherwise noted.