Gift
The Anniversary Prize Pal is a pet. It was originally released on September 5, 2020, as a gift from the Monthly Login Gifts for logging in 5 times during September. When opened, it gifts its owner a random prize, and then self destructs. 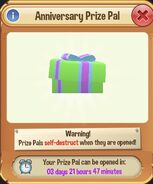 When “Open Prize Pal” button has been pressed. 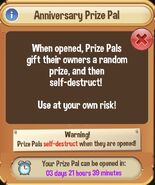 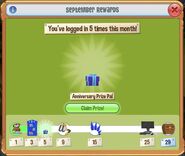