250 Gems
The Arctic Amulet is a clothing item worn around the neck. It was originally released in December 2016 at Sapphire Shop for 5 Sapphires.

The Arctic Amulet is a necklace with two blue beads either side of a snowflake pendant, matching the rest of the Arctic set. 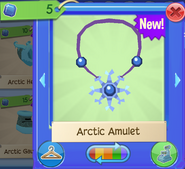