750 Gems
The Arctic Gauntlets are a clothing item worn on the paws. They were originally released in December 2016 at Sapphire Shop for 15 Sapphires.

The Arctic Gauntlets are two pairs of boot-shaped gauntlets. They appear to have an arctic theme to it, and it has an ice-blue rim on it. The main part of the exterior of the gauntlet has a swirly pattern and two black lines which appear to be shoelaces. 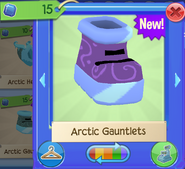