500 Gems
The Atlantis Venus Statue is a den item. It was originally released in May 2017 at the Sapphire Shop for 10 Sapphires and as a part of the Atlantis Bundle for 250 Sapphires.

The Atlantis Venus Statue is a golden statue of an otter that is swimming gracefully with a gem tiara on its head. The otter is resting on large spirals that seem to resemble waves. 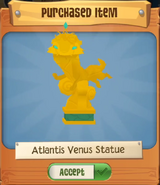 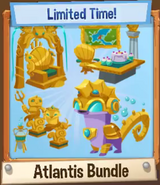