300 Gems
Not to be confused with the Pet Bat Balloon.

The Bat Balloon is a clothing item worn on the back. It was originally released during the Night of the Phantoms in October 2015 as a prize from the Super Sweets Minigame.

The Bat Balloon is connected to the player by a gray string. It is gray and bat shaped with red eyes, it visibly moves around with the string when viewed in inventory and when worn. 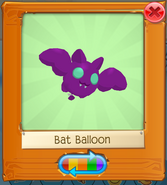 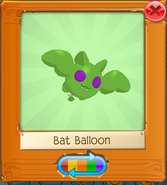 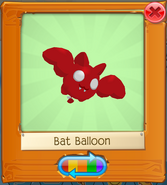 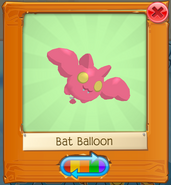 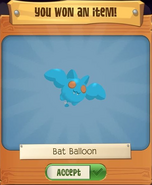 Add a photo to this gallery
Retrieved from "https://ajplaywild.fandom.com/wiki/Bat_Balloon?oldid=325170"
Community content is available under CC-BY-SA unless otherwise noted.