300 Gems
The Black Wallpaper is a den item. It was originally released in the Beta Testing at Jam-Mart Wallpaper shop and relocated at Jam Mart Furniture for 400 Gems in June 2015.

The Black Wallpaper is plain black wallpaper that has no patterns on it. This item only comes in one variety. 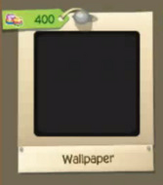 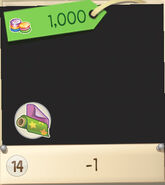 Black Wallpaper with the "-1" name.
Community content is available under CC-BY-SA unless otherwise noted.
Advertisement