300 Gems
Not to be confused with the Cami's Phrog.

The Cami's Frog is a den item. The Plushie was originally released in August 2016 at the Wild Explorers Tent. The item could be bought for a very short period of time for 1,000 Gems by tapping on the Cami's Frog plushie on the top of the aquarium.

The Cami's Frog is a mint colored frog plushie with a baby pink stomach and a darker pink plaster. There are a few black stitches that are sewn onto the the stomach. 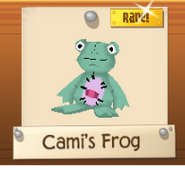 The Cami's Frog with a Rare! Tag. 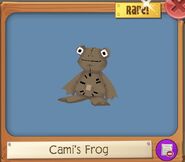 Hacked Variant (Default Texture)
Add a photo to this gallery
Retrieved from "https://ajplaywild.fandom.com/wiki/Cami%27s_Frog?oldid=298747"
Community content is available under CC-BY-SA unless otherwise noted.