250 Gems
The Chocolate Amulet is a clothing item worn around the neck. It was originally released during the Night of the Phantoms in October 2016 at Sapphire Shop for 5 Sapphires.

The Chocolate Amulet is an amulet made out of three chocolate bars, with a piece of chocolate candy at the end of the middle bar, which acts as the amulet. 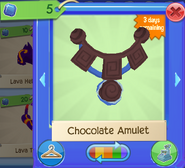 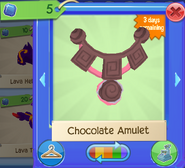