750 Gems
The Chocolate Gauntlets are a clothing item worn on the paws. They were originally released during the Night of the Phantoms in October 2016 at Sapphire Shop for 15 Sapphires.

The Chocolate Gauntlets are a set of bracelets made out of chocolate, which are worn on all paws.

The item comes in 3 variants of color. 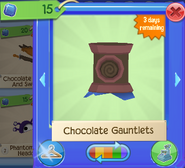 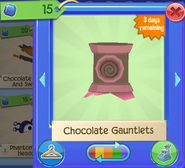 Add a photo to this gallery
Retrieved from "https://ajplaywild.fandom.com/wiki/Chocolate_Gauntlets?oldid=411528"
Community content is available under CC-BY-SA unless otherwise noted.