The Chocolate Tail Armor is a clothing item worn on the tail. It was originally released during the Night of the Phantoms in October 2016 at Sapphire Shop for 20 Sapphires.

The Chocolate Tail Armor looks like a half opened piece of chocolate candy, which has started to melt. 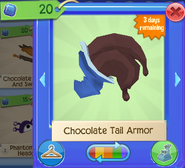 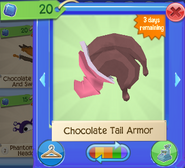