Prize
The Deer Trophy is a den item. It was originally released in December 2016 and can be obtained by completing the quiz in the Deer E-book in the Chamber of Knowledge.

The Deer Trophy is a small, golden trophy projecting a dark-blue Deer in mid-air. 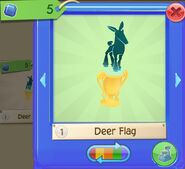 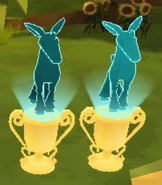