390 Gems
Not to be confused with the Pet Elf Armor Helmet.

The Elf Armor Helmet is a clothing item worn on the head. It was originally released in the Beta Testing at Jam Mart Clothing for 200 Gems. It was re-released as a prize in the Wolf Treasure Hunt in June 2015.

The Elf Armor Helmet has two pieces of metal straps on each side and one piece of metal on the head. Both the straps have a swirly design. The top piece on the helmet part has two gems inlaid in it. 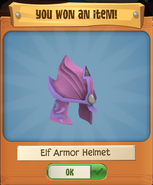 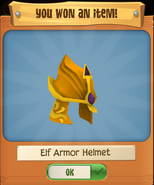 Elf Armor Helmet in the Beta Testing
Add a photo to this gallery
Retrieved from "https://ajplaywild.fandom.com/wiki/Elf_Armor_Helmet?oldid=280435"
Community content is available under CC-BY-SA unless otherwise noted.