600 Gems
Not to be confused with the beta Dragon Mask.

The Epic Dragon Mask is a clothing item worn on the head. It was originally released in August 2015 at Jam Mart Clothing for 2,000 Gems.

The Epic Dragon Mask is a mask that resembles a dragon's head. It has two large horns and two medium sized eyes. It has a pointed snout much like a triangle. There are also spikes starting from the forehead to the back. This item comes in 8 variants, 2 of which are Rare. 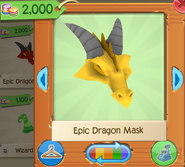 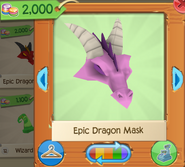 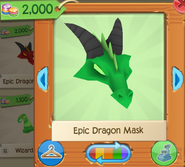 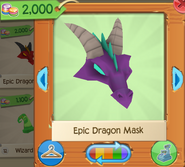 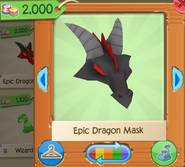 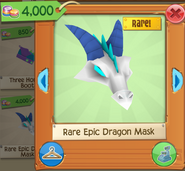 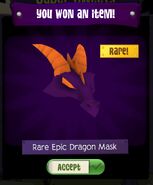 Super Sweets variant.
Add a photo to this gallery
Retrieved from "https://ajplaywild.fandom.com/wiki/Epic_Dragon_Mask?oldid=241827"
Community content is available under CC-BY-SA unless otherwise noted.