250 Sapphires for the Snow Leopard Bundle or 15 Sapphires

750 Gems
The Feathered Tail Armor was originally released in January 2017 at the Sapphire Shop for 250 Sapphires as part of the Snow Leopard Bundle.

The Feathered Tail Armor consists of large, dark pink feathers ending at a dual-colored blue slip-on that would fit over an Animal’s tail. This item comes in 2 variants. 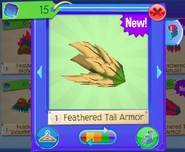