The Founders' Boots is a clothing item worn on the feet. It was originally released in August 2015 as a part of the Founders' Collection at Jam Mart Clothing for 1,500 Gems.

The item was also gifted to all the people involved in Play Wild Beta in February 19, 2016 with a Redeem Code sent by mail.

The Founders' Boots seem to come in an old like shoe with the color of a light brown. It has red laces with a grey bottom. The shape seems to be bulky, with sharp ends. 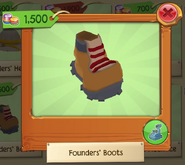