450 Gems
Not to be confused with the Pith Helmet or the Rare Explorer Helmet.

The Founders' Helmet is a clothing item worn on the head. It was originally released in August 2015 as a part of the Founders' Collection at Jam Mart Clothing for 1,500 Gems.

The item was also gifted to all the people involved in Play Wild Beta in February 19, 2016 with a Redeem Code sent by mail.

The Founders' Helmet is a tan bucket hat with a yellow-tan trim and buckle. It resembles a Safari style hat. 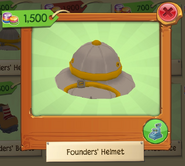 Jamaa Journal, Volume 002 - August 2015
Add a photo to this gallery
Retrieved from "https://ajplaywild.fandom.com/wiki/Founders%27_Helmet?oldid=306701"
Community content is available under CC-BY-SA unless otherwise noted.