300 Gems
The Founders' Trunk is a den item. It was originally released in August 2015 as a part of the Founders' Collection at Jam Mart Furniture for 1,000 Gems.

The item was also gifted to all the people involved in Play Wild Beta in February 19, 2016 with a Redeem Code sent by email.

The Founder's Trunk is a brown trunk that has many different stickers such as a sticker of a Wolf or a sticker of the Animal Jam Play Wild Logo. 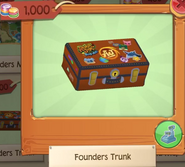