10 Sapphires
The Fox's Squirrel Chew Toy is one of the Arctic Fox's pet den Items. It was originally released on February 7, 2018 at Claws 'N Paws for 10 Sapphires.

The Fox's Squirrel Chew Toy appears to be a small stuffed squirrel toy made of different fabrics stitched together. It has a large wind-up key on the back, two small black eyes and a triangular black nose. This item comes in 6 variants. 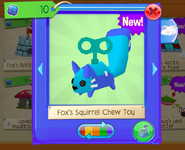 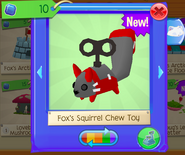 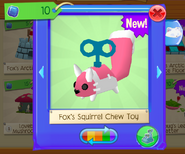