500 Gems
The Fox Ottoman is a den item. It was originally released on August 2016 at the Bundle Shop (Premium Shop) as a part of the Tree House Den bundle for $3.99 (real currency).

On February 2016, the item was relocated to the Sapphire Shop for 10 Sapphires.

The Fox Ottoman is a brown ottoman with a striped orange cushion. There are four black legs supporting the ottoman. This item comes in only one variant. 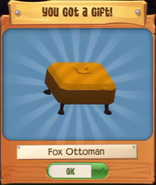 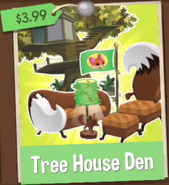