250 Sapphires for the Jamaaliday Accessory Bundle

The Gingerbread Armor is a clothing item worn on the back. It was originally released in December 2016 at the Sapphire Shop for 20 Sapphires or for 250 Sapphires for the Jamaaliday Accessory Bundle.

The Gingerbread Armor consists of three armor plates that seem to be made of gingerbread. One armor plate is worn on the chest, while the others are worn on the shoulders of the animal. There are three gumdrops and icing on each shoulder plate, with a rooftop shingles design on either side, and there is an icing bow tie and some icing on the chest plate. This item comes in 2 variants. 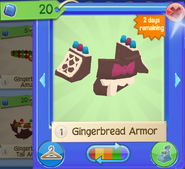 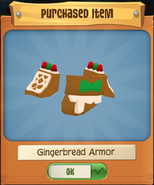