250 Sapphires for the Jamaaliday Den Bundle

500 Gems
The Gingerbread Fireplace is a den item. It was originally released during Jamaalidays on December 2015 through the Gingerbread House Bundle for $3.99 (real currency).

In December 2016, the item re-released at the Sapphire Shop for 10 Sapphires and also as a part of the the Jamaaliday Den Bundle for 250 Sapphires.

This item comes in one variant. This item is a large fireplace, made up of gingerbread with a white icing trim. There are two candy cane pillars, one on each side of the fire. The fire's logs are also made of candy canes. Three stockings hang from the mantle. 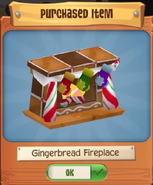 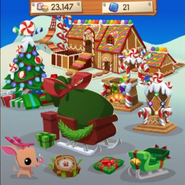 Jamaaliday Den Bundle
Add a photo to this gallery
Retrieved from "https://ajplaywild.fandom.com/wiki/Gingerbread_Fireplace?oldid=341675"
Community content is available under CC-BY-SA unless otherwise noted.