Not to be confused with the Astronaut Boots

The Golden Astronaut Boots is a clothing item worn on the head. It was originally released on July 17, 2021, for 15 Sapphires at the Traveling Salesman Shop. 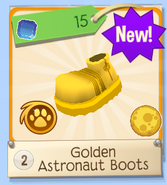