250 Sapphires for the Friendship Cottage Bundle

750 Gems
The Heart-Shaped Television was originally released during the Friendship Festival in February 2017 at the Sapphire Shop for 250 Sapphires as part of the Friendship Cottage Bundle.

This is a dark red/maroon television set in the shape of a heart. Around the screen is a magenta heart-shaped border. The tv rests on four pink legs. When an animal sits in front of the tv, an animation of spiralling hearts appears on the screen. This item comes in one variant. 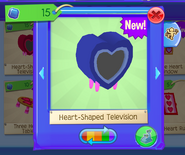 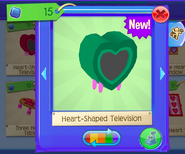 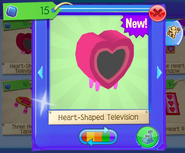 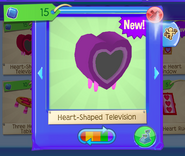