The Hippo was originally released on June 3, 2020, at the Sapphire Shop for 150 Sapphires or through the Rowdy Hippo Bundle for 250 Sapphires.

The Hippo's default appearance is a light purple for the primary color and pink for the secondary color on its nose and stomach. The interior of its ears are pink, which cannot be changed. It also has a small curly tail, two oval nostrils, and dark purple semicircle eyes. 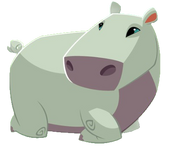 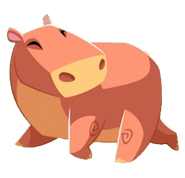 Add a photo to this gallery
Retrieved from "https://ajplaywild.fandom.com/wiki/Hippo?oldid=341784"
Community content is available under CC-BY-SA unless otherwise noted.