750 Gems
The Ice Armor is a clothing item worn on the back. It was originally released in August 2015 at Jam Mart Clothing for 2,500 Gems. The item was re-located at the Sapphire Shop in May 2016 for 15 Sapphires. 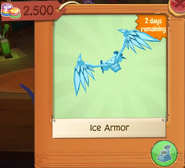 Ice Armor when it was in Jam Mart Clothing
Community content is available under CC-BY-SA unless otherwise noted.
Advertisement