1,000 Gems
The King's Tail Armor is a clothing item worn on the tail. It was originally released in July 2016 at Sapphire Shop for 20 Sapphires.

The King's Tail Armor consists of three armor plates that cover a long tail armor. This item comes in 3 variants. 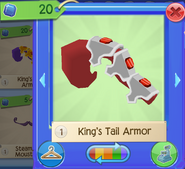 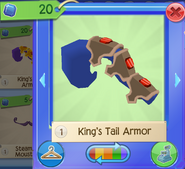