750 Gems
The Lava Gauntlets is a clothing item worn on the paws. They were originally released in October 2016 at Sapphire Shop for 15 Sapphires.

The Lava Gauntlets consists of molten lava rock. The rock is carved into the shape of gauntlets, and there is also a hole in the back where the animal's paws can slip into. On the front of the gauntlets, a large amount of lava is visible and resembles the claws of the gauntlets. This item comes in 2 variants. 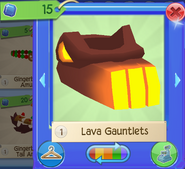