300 Gems
Not to be confused with the Rare Leap Year Frog Hat.

The Leap Year Frog Hat is a clothing item worn on the head. It was originally released during Leap Year in February 2016 at Jam Mart Clothing for 1,000 Gems.

The Leap Year Frog Hat takes on the appearance of a frog head. There is a fly that flies around the hat, which the frog will proceed to catch with its tongue. This animation loops.

This item has 5 variants. 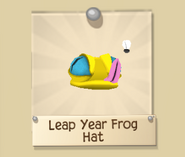 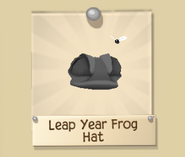 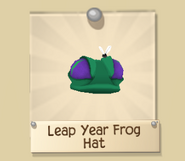 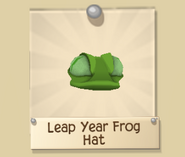