Light In The Dark

Light In The Dark is a single-player seasonal Minigame released during the Night of the Phantoms in October 2016.

Gameplay is rather simple. The player touches the screen and drags around a torch. The Phantoms dislike the light so the player can push them around rather easily with the torch. There are blue beams of light that spawn randomly in the area, and the player can push them into the light to make them disappear. Every level adds another phantom (highest amount is 6), and pass a certain amount of levels and the Phantoms will speed up. If the player cannot control the hordes of Phantoms, they will take the player’s orange and white candy away and the player will restart from level one. Good luck! 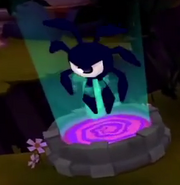 Cracked hole to Light In The Dark in the Phantom Vortex. 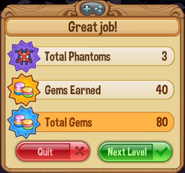 Add a photo to this gallery
Retrieved from "https://ajplaywild.fandom.com/wiki/Light_In_The_Dark?oldid=261816"
Community content is available under CC-BY-SA unless otherwise noted.