Not to be confused with Monkey Plushie

The Monkey Plushie (Beta) is a den item. It was originally released in the Beta Testing at Jam Mart Furniture for 50 Gems.

In June 2015, the plushie was available through The Claw for 5 Gems.

The Monkey Plushie is a small, stuffed monkey toy who came in blue/beige colour only and had no fur on his belly. 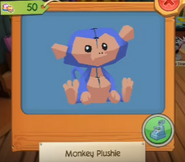 Beta Testing design plushies in Jam Mart Furniture
Add a photo to this gallery
Retrieved from "https://ajplaywild.fandom.com/wiki/Monkey_Plushie_(Beta)?oldid=313528"
Community content is available under CC-BY-SA unless otherwise noted.