240 Gems
The Mushroom Chair is a den item. It was originally released on January 2016 at Jam Mart Furniture for 800 Gems.

The Mushroom Chair resembles a mushroom with grass surrounding it. It has three little white flowers on it. There are long leaf stalks on each side of the mushroom which appear to be arm rests. This item comes in 6 variants. 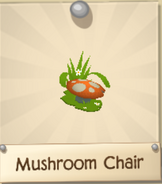 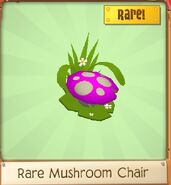