500 Gems
The Pegasus Gauntlets is a clothing item worn on the paws. They were originally released in February 2016 for 10 Sapphires at the Sapphire Shop.

The Pegasus Gauntlets are blue and golden gauntlets that have white wings on the back. This item only comes in one variant. 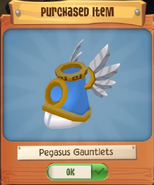 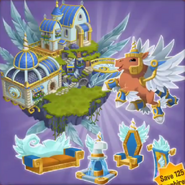