Jammers can send Pets on various expeditions. Once their pets reach level 3 or higher through using the Pet Station and have enough energy, they can be sent away on expeditions via the docked boat at Crystal Sands. While pets are away, they cannot be placed in dens, equipped, or interacted with at Pet Stations. It will also have the background of the expedition it was sent on in the inventory and in the trade list. Once the player has sent the pet on an expedition, it will show the pet on the boat, eventually leaving the dock. When a Jammer send a pet to their favorite expedition, the pet will make the Heart Eyes Emote. The pet will bring back various rewards when it returns from the expedition. To send your pet, they must have the required amount of energy and be on the required level.

Note: The prizes for the newer expeditions are not added to the list because there are too many possible prizes that can be received for each expedition alone, many of them which are repeated through several expeditions.

Each pet has a favorite type of location. It is rumored that sending your pet to a location it likes will result in a higher chance of receiving a prize item, or if a 5-day expedition, an Exotic Pet DNA Vial. When a pet is sent to its favorite location, it is indicated by the pet thinking of a heart eyes emoji. Sending it to a "wrong" location will result in a smiley face emoji. 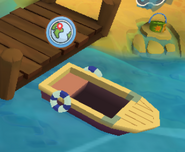 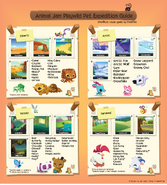 Pet on an expedition