The Pet Glow worm appears to be a small worm with a large head and a smaller tail end. By default, it has a pink body and light pink stripes with two glowing green stripes on its end. This pet is randomized when obtained from a Pet Glow Worm Token.

This luminous, glow-in-the-dark pet was designed by Jammer wolfbatdragon! 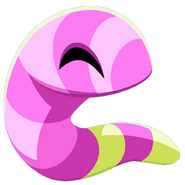