50 Sapphires
The Highland Pony is a pet. It was originally released in August 2016 at Sapphire Shop and Claws 'N Paws for 50 Sapphires.

The Highland Pony resembles a pony with a triangular cream colored head with two nostrils and a mouth at the bottom. There are two oval shaped ears with dark pink insides and one ear has a cut in it. The pony has a small body with large short legs and dark gray hooves. The mane is a hot pink with different shades in different strands of hair. The tail is the same as the mane. The pony has large semi-circle purple eyes in the sides of the head.

Highland ponies originated in the highlands of Scotland, where their thick coats protect them from the cold weather. 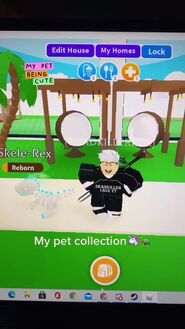 Add a photo to this gallery

Highland Pony pet certificate.
Add a photo to this gallery
Retrieved from "https://ajplaywild.fandom.com/wiki/Pet_Highland_Pony?oldid=334150"
Community content is available under CC-BY-SA unless otherwise noted.