The Rockhopper Penguin has rather large orange eyebrows and flipper-like feet. It has a purple body with a beige belly. Its eyes are a deep, rich purple-pink and its pupils are large; they cover the majority of its eyes.

Even though rockhopper penguins are some of the smallest penguins in the world, they can dive over 300 feet deep when chasing their food. 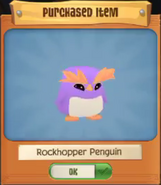 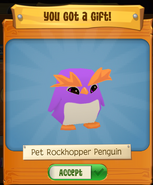