Animal Jam Wiki
Register
Don't have an account?
Sign In
Advertisement
in: Pets, Available, A Puppy's Tale,
and 4 more

50 Sapphires or Prize from A Puppy's Tale
Not to be confused with the Pet Lab Puppy or the Pet Poodle Puppy.

The Spotted Lab Puppy is a pet. It was originally released in February 2017, as a prize from completing the Expert mode in A Puppy's Tale Minigame.

The Spotted Lab Puppy is a small white lab puppy with brownish beige spots. Its drooping ears, muzzle and tail are the same color as its brownish beige pattern. It has its tongue out and has round, gray eyes. The puppy wears a vermillion red collar with a golden name tag. The pet comes in only one variant when won from A Puppy’s Tale, however puppies purchased on August 26th, 2020 were able to be customized. It is confirmed in-game that it is female.

Labs, short for labrador retrievers, are the most popular dog breed in the United States. 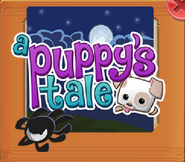