Not to be confused with the Pet Ocelot Kitty, Midnight Kitty or Pet Magenta Kitty.

The Tabby Kitty is a pet. It was originally released on June 2016 at Sapphire Shop and Claws 'N Paws for 50 Sapphires.

It has a large head and a small body. The ears stand straight up and the eyes are large and aqua-blue colored. A tight collar with a purple stone is around its neck.

Tabbies are most easily recognized by the dark swirls, stripes, or other patterns on their fur. 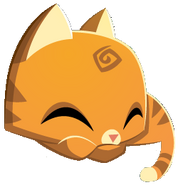