Animal Jam Wiki
Register
Don't have an account?
Sign In
Advertisement
in: Items, Available, Epic Night of the Phantoms Bundle (2019),
and 7 more

375 Gems
Not to be confused with the Rare Phantom Table.

The Phantom Table is a den item. It was originally released during the Night of the Phantoms in October 2015 at Jam Mart Furniture for 1,250 Gems.

The Phantom Table is a wooden table that is carved to look like a spiky phantom which is seen in the Phantom Dodger minigame. It has a large crescent shaped eye with a smaller circle off to the right resembling the pupil. 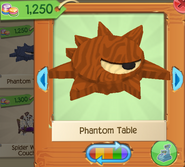 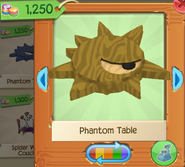 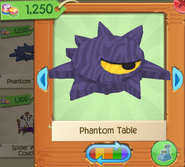 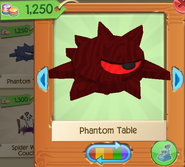 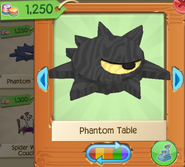 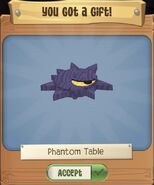