Play Wild Beta (also called the Beta Stage, or in this case Beta Testing) was the first stage of the Animal Jam timeline. The stage began on December 18th, 2014 until it officially ended on May 13, 2015. The game was available on Android devices only.

Play Wild Beta is no longer available since the testing period has already ended.

Play Wild Beta allowed jammers to play by requesting an invite to join. The invite allowed Jammers to test out Play Wild before its release. This was soon deleted when the Beta Testing ended.

Play Wild began its beta testing on December 18th, 2014 for Android users only and ended it on May 13th, 2015. The beta version of the app was distributed to beta testers via email.

Play Wild Beta has slight differences to the actual Play Wild. The toolbar on top of the screen had only two gameplay elements: Buddies and Gems.

The users' data were removed with the March 2015 update. Beta Players received a mail from AJHQ with a redeem code to use on animaljam.com.

After the Beta Testing ended, all beta accounts were deactivated.

When signed-in, Jammers have to choose an avatar between the Founders of Jamaa: Wolf, Rabbit (Bunny), or Monkey. All animals can be fully customized: color, pattern, adding eyelashes, accessories and clothes.

March 2015 update: Jammers can have multiple avatars for 30 Sapphires each

The Small House is the default den and the only den available for every Jammers. The place, furnitures and Music are similar to the actual Defaut Small House.

Players can see how much Gems and Sapphires they have by tapping the gems icon on the top of their screen.

Gems are the first and the main currency in Play Wild. Each Jammers received 2,500 Gems when signed-in. They can be earned from playing minigames or recycling items. In the Beta Testing, they could be spent on clothing, furniture, wallpaper or flooring.

Sapphires were introduced with the March 2015 update. All Jammers received 50 Sapphires when sign-in. There is no other way to have Sapphires as Jammers couldn't win or buy them. Sapphires could be spent on clothing, furniture, wallpaper, flooring or extra animals.

Jamaa is a world founded by the Monkey, the Wolf and the Rabbit. The world has 8 lands: Jamaa Township, Sarepia Forest, Coral Canyons (including the Canyons Pathway), Temple of Zios and Crystal Sands.

Mt. Shiveer, Appondale and Kimbara Outback are plunged into the darkness as they're not opened yet. Jamaa map also shows Phantoms floating on Mt. Shiveer and Appondale..

March 2015 update: Mt. Shiveer is accessible to all Jammers. Appondale and Kimbara Outback are still plunged into the darkness.

Jamaa Township is similar to the actual place with Jamaa Store (Jam Mart Clothing), Jamaa-Jam Mart (Jam Mart Furniture) and Jamaa-Club Geoz (Club Geoz). The Jamaa-Pillow Hut (Pillow Room) stands instead of the actual Sapphire Shop behind the bulletin board.

Missing: The bridges to Appondale and Kimbara Outback, the links to Minigames and the Panda Secret Passage

Sarepia Forest is similar to the actual place.

The amusements available are the toboggan, the Fun Facts and several videos from the Sarepia Theater.

Missing: The wooden plateform that leads to the Monkey Secret Passage and the links to Minigames

Coral Canyons is similar to the actual place with all the buildings's doors closed. The only amusements available are the Fun Facts and the Long Shot Minigame. Jumping on the Bridge makes the stones drop as if the bridge were going to fall apart. Dancing on it makes appear a dark rainy cloud (needs several Jammers).

Canyons Pathway is similar to the actual place.

Missing: The Horse Secret Passage and the flying butterflies

Temple of Zios is similar to the actual place with all the buildings's doors closed. The only amusements available are the Fun Facts and the Falling Phantoms Minigame. Sleeping around the Statue of Zios make Phantoms appear (needs several Jammers).

Crystal Sands is similar to the actual place with all the buildings's doors closed. The amusements availables are the Fun Facts, three toboggans water slide and the Overflow Minigame. The place leads to the Canyons Pathway and the Temple of Zios.

Missing: The Tiger Secret Passage and the Mt. Shiveer passage which is closed by a large stone

Mt. Shiveer is similar to the actual place and was launched with the March 2015 update.

The amusements availables are the Fun Facts, an icy toboggan and the Phantom Dodger Minigame. Also, there is the Hot Cocoa Hut which provides clothes at the Hot Cocoa Store (Shiveer Shoppe).

Jumping on the ice makes it cracks (requires several jammers).

The stores provide Clothes and furnitures. They are located everywhere in Jamaa.

Jamaa Store (Jam Mart Clothing) has a main catalogue and three wooden tables. The main catalogue remains the same. Three or four items lay on each table. Everyday, the items pass from table to table from left to right. It means that new items appear on the left table and some come out of store after reaching the right table.

After all items have released, they re-released again in a new cycle until the March 2015 update or the end of the Beta Testing.

March 2015 update: New items were added whereas some came out of store. Some items were relocated or cost sapphires

Moreover, the shop also provides a daily showroom where every item lays around the place can be bought (plushies, plants and furnitures).

March 2015 update: New items were added whereas some came out of store

Hot Cocoa Store (Shiveer Shoppe) has opened with the March 2015 update. The place is similar to the actual shop.

It provides winter clothes for gems or sapphires. The items on the tables are the same as the catalogue on the back of the room. Some items from the Main Jamaa Store have been re-located there.

The games are directly available from each places as there's no Games Menu.

There are 4 Minigames available to win Gems: Falling Phantoms, Overflow, Pill Bugs and Long Shot. Phantom Dodger was released with the March 2015 update.

Dance Party and Tea Party were introduced with the March 2015 update.

The Dance Party is an event accessible to all Jammers. It takes place at Jamaa - Club Geoz Dance Party and is similar to the actual party with DJ Table, Jukebox and dancefloor.

The little showroom on the very back of the club provides a few dance-themed items for Gems or Sapphires.

The Tea Party is an event accessible to all Jammers. It takes place at Jamaa - Pillow Hut and is similar to the actual event.

There is a little showroom on the back of the place with a few tea-themed items to buy for Sapphires or Gems. 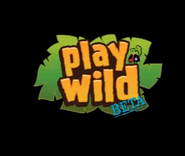 Jamaa Journal on the Bulletin Board at Jamaa Township 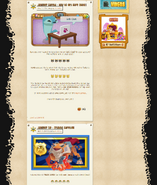 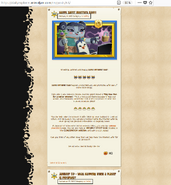