250 Gems
The Princess Amulet is a Clothing Item worn on the Neck. It was originally released in August 2016 at the Sapphire Shop for 5 Sapphires.

The Princess Amulet is made of two pieces of different colored laces with some pearls on it. There is a golden tiara on it. The item comes in three variants. 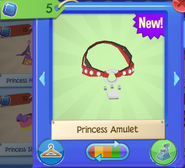 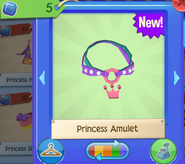 Add a photo to this gallery
Retrieved from "https://ajplaywild.fandom.com/wiki/Princess_Amulet?oldid=419155"
Community content is available under CC-BY-SA unless otherwise noted.