15 Sapphires
The Princess Vanity is a den item. It was originally released in January 2016 as a part of the Princess Castle Bundle for $3.99 (real currency).

At the end of February 2016, the item was relocated to the Sapphire Shop for 15 Sapphires.

The Princess Vanity is a bright pink vanity with bright blue drawers. There is a golden crown with a sapphire on the top of the vanity. 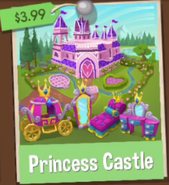