360 Gems
Not to be confused with Baby Bonnet.

The Rare Baby Bonnet is a clothing item worn on the head. It was originally released during the Night of the Phantoms in October 2016 at Jam Mart Clothing for 1,200 Gems.

The Baby Bonnet is a hood which covers the entirety of the head, apart from the face of an animal, and has a bow on the front top of it. The opening of the hood is lined with fluffy material.This item comes in 6 variants. 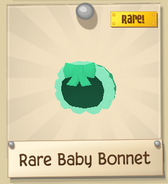 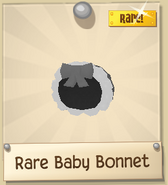 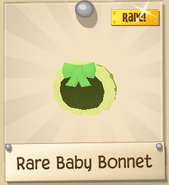 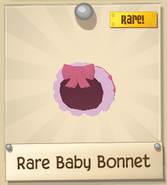 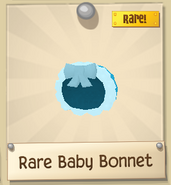 Add a photo to this gallery
Retrieved from "https://ajplaywild.fandom.com/wiki/Rare_Baby_Bonnet?oldid=266397"
Community content is available under CC-BY-SA unless otherwise noted.