Roll!!!!! is a single-player mini-game that is located in Sarepia Forest. It was introduced on April 11th, 2016.

The objective of this game is to guide the rolling hedgehog across a series of floating platforms and into a golden portal. If the hedgehog falls off the platforms down to a certain height, the player will lose the game. There are many levels that progressively become more difficult as the player advances through them.

The hedgehog can be controlled in two different modes: touch control or tilt control. In touch control mode, the player presses on the screen and drags in the direction that they want to move the hedgehog; a transparent grey box appears around the area that is pressed to help the player judge where to drag. In tilt control mode, the player tilts their mobile device to control the direction and speed of the hedgehog's movement; the speed changes depending on the angle of the tilt. In both modes, there is a transparent grey box divided into grids at the bottom corner of the screen; this box includes a yellow paw icon that move to indicate the direction and speed that the user is inputting.

There are a variety of obstacles that can hinder the hedgehog's movement. Some platforms move up and down so that the player must correctly time their movements to get across them. There are small, dark-purple pads in some levels; these will launch the hedgehog upwards if it rolls over them. Some levels include gaps between the platforms where the player must launch the hedgehog off the edge at the correct speed to land safely on the other side. There are some obstacles that will attempt to push the hedgehog off the platforms, such as spinning cogwheels and pipes that periodically spew out a gust of steam.

The player earns Gems by playing this game. The amount of Gems earned is determined by how quickly the player reaches the goal. 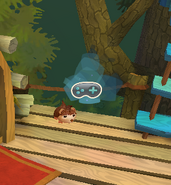 The game's location in Sarepia Forest

The results screen after completing a level

Falling after missing a jump

Turning along a corner