500 Gems
The Royal Boots are a clothing item worn on the feet as a part of the Royal Outfit. It was released in November 2015 through the Royal Tiger Bundle at The Premium Shop for $5.99. (real currency.) It was relocated to the Sapphire Shop for 10 Sapphires in February 2016.

The Royal Boots are sharp clawed shoes that appears to be made out of gold. This item comes in only one variant. 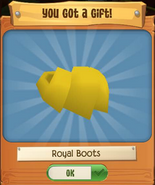 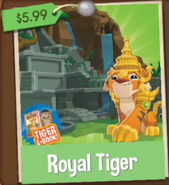