The Sapphire Shop is a store located in Jamaa Township. It was introduced on February 2016. The store sells sapphire animals, pets, dens and den items, clothing, music and gems.

The Sapphire Shop is a small, octagonal, stone-brick building trimmed with sapphire-blue bricks. The windows and door are decorated with sapphires, and the stone dome roof has four skylights that each emit a blue ray of light. The sapphire bricks outside of the shop shimmer in the light.

The inside of the store is an octagonal room floored with cobblestone and iridescent gems. Each corner of the room has a large, blue pillar with windows between each pair of pillars. Hanging from the ceiling are bushes growing sapphire gems with dark green vines that droop down. There are eight different stands that allow Jammers to buy armor sets, clothing, den items, dens, tracks, animals, and pets, as well as exchange sapphires for gems.

The Pet Stand was released on June 2016.

The different portions of the Sapphire Shop can be accessed by approaching one of the stands and clicking on the circular icon that pops up. 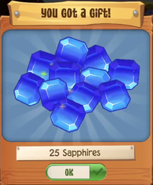 Sapphires given to Jammers when the Sapphire Shop was released

Sapphire Shop before October 2016
Add a photo to this gallery
Retrieved from "https://ajplaywild.fandom.com/wiki/Sapphire_Shop?oldid=294872"
Community content is available under CC-BY-SA unless otherwise noted.