Sir Gilbert is the Alpha of the Tigers. He is a polite and regal warrior.

Sir Gilbert is presented as a large orange tiger with whisker markings, flecks beneath his green eyes, and a beard separated into three braids. His attire is a red cape with a blue cloth sash fastened around his right arm with a medal of merit. The medal of merit is striped blue and yellow and the metal part of the medal is in the form of a blue cross. He also wears two rings, one with a ruby and one without. Around his neck is a plated armlet with a dark purple stone embedded in it. He also wears silvery metal cuffs on all four of his legs. 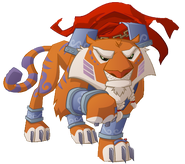 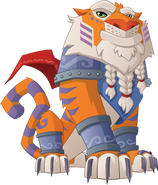 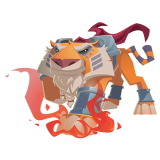 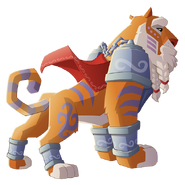 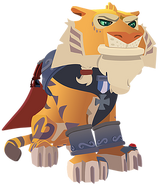 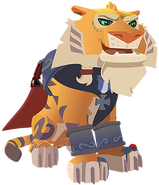 A Snow Leopard wearing Sir Gilbert's Alpha Outfit which is based on Sir Gilbert.
Add a photo to this gallery
Retrieved from "https://ajplaywild.fandom.com/wiki/Sir_Gilbert?oldid=254907"
Community content is available under CC-BY-SA unless otherwise noted.