The Snowcone Hat is a clothing item worn on the head. It was originally released in August 2016 at Jam Mart Clothing for 850 Gems.

The Snowcone Hat is a hat in the shape of a cone with 3 stripes of colorful shaved ice in it. In the shaved ice, there is a multi-colored red and white striped straw. On the side of the cup, there is a golden AJ logo.

The item only comes in one variant. 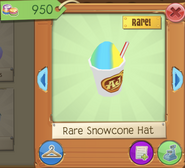